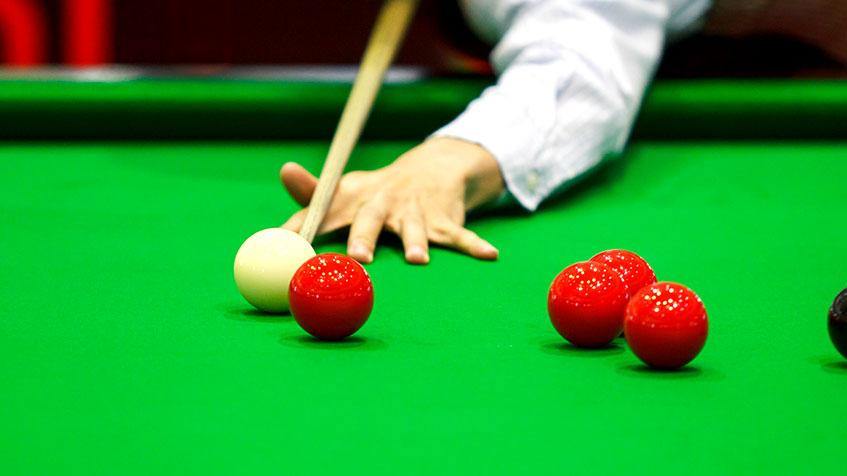 If you’re a particularly casual player whose experience of cue sports is mostly limited to the odd game of pool down the pub, then the most important ball is always the object ball, isn’t it? It’s all about whether it goes in the pocket or not. And, to some extent, that’s true in snooker as well. But the cue ball is vital too. Fail to control it and you’ll never come close to amassing sizeable (or even relatively impressive) breaks.

‘Top spin’ is something you need in your armoury. Just whack the object ball with no thought as to the journey you’re sending the white on afterwards and you’ll be all over the place. But learn this simple trick and you can ensure the white carries on much further than the point where it strikes the object ball.

Raise your bridge hand higher than you normally would. This will have the tip of the cue pointing higher up the white. Much higher than where you would normally strike it in the middle. Now play the shot and watch the cue ball travel forward. You’re controlling the thing…

Applying ‘side’ or ‘side spin’ (or ‘English’, in American parlance) looks easy. And it is. But applying the right amount of side is less so. Imagine a straightish pot. Hit the object in the sweet spot and the white in the very centre and the object ball’s potted, the white stays fairly still afterwards. But now you’re on nothing. You wanted the white to go to the left-hand side of the table…

Well, you should have hit the cue ball on its left-hand side, then. Applying ‘left-hand side’ spins the ball clockwise and sends it spinning off to the left (and vice versa with right-hand side). How far away from the centre of the white you hit it will depend on how much side is applied.

That’s the basic theory, anyway. The only way to master it is, like with all of these shots, to practice it. Over and over and over (and over) again.

If you learn to the control the white ball, with a bit of luck, you shouldn’t need to go looking for the rest all that often. But, invariably, it’ll come in handy at some point during a frame. Don’t be intimidated by the rest, though. It’s not a totally new way of playing or even cueing, really. Think of it as an extension of your arm.

Now. It’s important to just focus on the pot here. You won’t be able to get too clever with position, so just ensure you’re potting. Make sure you’ve got a firm, supportive grip on the end of the cue and you’ve settled the rest down and slid it out of the way of your shot. Then, raise your elbow parallel to the table, line up your shot and poke at it firmly, with very little follow through.