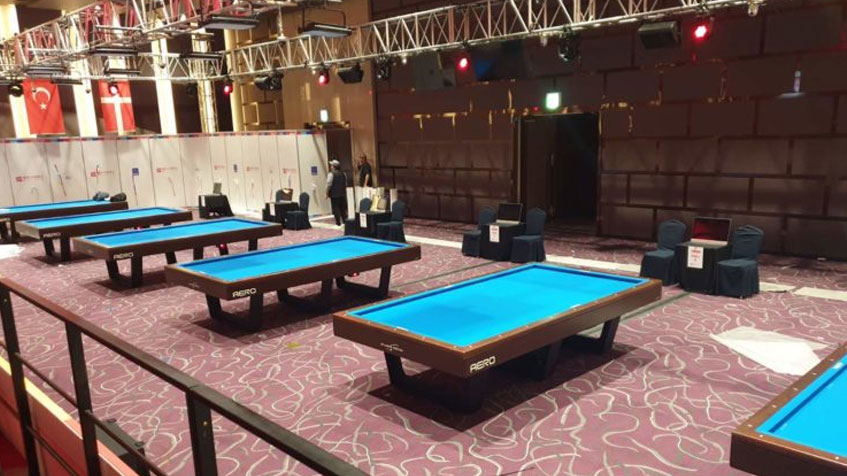 The seventh round of the PBA Tour, the championship launched a year ago by the Professional Billiards Association in South Korea, takes place from January 23rd to 27th. Billiards Bréton has supplied 8 AERO 3m10 models equipped with GORINA cloth on which the competition will take place

The billiard tables have been installed in the reception hall of the MVL Hotel de Goyang to welcome the 196 players who will compete during these 5 days.

PBA tour (men’s tournament) gathers 128 players and is endowed with 250 million Wons of prize money (about 193 000€) including 100 million Wons (77 000€) for the winner. The first two phases of this tournament with 128 then 64 players, are played with 4 players at the table and 2 qualified for the next round according to the “Survival” game mode. This game mode, particularly appreciated in Korea, consists in awarding the same points credit to all players at the beginning of the game, then awarding 3 points to the player who succeeded its carom and taking 1 point away from each of his three opponents. From the 16th final onwards, the matches are again played with 2 players:

LPBA tour (women’s tournament) gathers 68 players and is endowed with 100 million Wons of prize money (about 77 000€) including 15 million Wons (11 500€) for the winner. The first 4 phases of the tournament (up to the quarter-final) are played in “Survival” mode. The semi-final is then played in 3 winning sets of 11 points and the final in 5 winning sets.